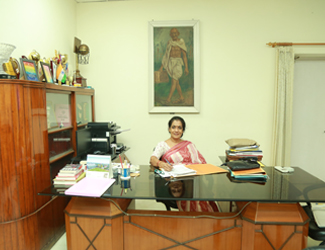 The beginnings of Kirori Mal College are deeply connected with the becoming of India as a nation. Its roots go back to 1951 when it was established as Nirmala College by the American Jesuits. Coming into existence so close to the partition of the country, the college represented in many ways, the anguish as well as the hopes of the times. It was situated in an evacuee building in the crowded, commercial area of Qutub Road in Old Delhi. It functioned not only an educational institution but doubled up as some kind of shelter for families uprooted during the partition. Times were difficult but still, it was evident that the institution was in need major transformations. This happened when the visionary Vice-Chancellor Prof G D Mahajani, with active patronage and cooperation of the Union Government, took over the dilapidated institution and handed it over to Seth Kirori Mal Charitable Trust, a philanthropic organization dedicated to the spread of education in the state of old Punjab (including Haryana). In July 1954, the college with the name Kirori Mal College was established and was allotted land on the fringes of the University Enclave better known as the North Campus. The first President of the Indian Republic, Dr Rajendra Prasad, laid the foundation stone of the present college building in the summer of 1955, thus certifying the priority the Government of India accorded to the establishment and the flowering of this institution. With generous funds from both the Government of India (ensured by the then Education Minister Mr Humayun Kabir) and the Seth Kirori Mal Charitable Trust along with the tireless strivings of the famous architect duo Anand Apte and Jhabwala, a wild, stinking, hitherto uninhabitable tract of land was transformed into an impressive and imposing premises of a new, modern, secular institution of higher learning within the span of one year. The hallmark of the new building has been its unique, state of the art facade which still remains unaltered in the last 60 years as a mark of respect for the founding minds, especially the architect duo. It is a matter of pride and honour that the college building, especially its facade, owing to its unique design, building plan and structural layout, has been a subject of study in the courses of architecture and design in the School of Planning and Architecture, a premier institution in the country. Under the able stewardship of Ch. Hardwari Lal, the first Principal of the college (1954-57), Kirori Mal College began its first full-fledged functioning from the academic session 1956-57.

If any individual should be credited to have single-handedly led the college from its nascent stage to its maturity, it was Dr Sarup Singh, the legendary Principal of the college (1957-65) who later became the Professor-and-Head, Department of English, University of Delhi and then the Vice-Chancellor, DU, followed by becoming the Lt Governor, Delhi and then the Governor of Gujarat. Dr Sarup Singh transformed Kirori Mal College from a fringe to a major institution of the University of Delhi by consciously investing on talent during faculty recruitment. He scouted for the best talent across the country and even outside and eventually persuaded them to join as teachers in Kirori Mal College. It was Sarup Singh's vision to make Kirori Mal College an institution of modern learning as well as his ability to identify talented teachers that led to legends like K M Ashraf (History), Frank Thakurdas and Nand Lal Gupta (Political Science), Ajeet Kumar and Vishwanath Tripathi (Hindi), N S Khare (Physics), Arun Bose (Economics), B N Raina, Raj Kumar Kohli, Amritjit Singh and O P Grewal (English) join Kirori Mal College as teachers and shape the present and the future of the institution for decades. Under Sarup Singh‘s leadership Kirori Mal College witnessed an unprecedented development in the form of new departments, new teachers across disciplines, well-equipped laboratories and of course a well-stocked library. The science departments of the college got a new impetus at this time owing to the conscious policy of the Nehruvian Government to promote sciences in higher education in the 1960s. The expansion of public funded higher education in the 1960s led to more students and teachers joining colleges and Kirori Mal College was no exception. The good work of Dr Sarup Singh continued even after his tenure when Sh. Mangat Ram became the Principal (1965-76).

The quest for development of Kirori Mal College, despite being ruptured by the premature death of Dr N S Pradhan in 1989, continued owing to the institutional mechanisms and the processes put in place by the dynamic leadership of the teachers in college. The New Education Policy of the Government aligned with the New Economic Policy of the 1990s unleashed new avenues and new challenges as well for the entire sector of Higher Education. The college, undaunted by the new challenges, embraced them with a critical engagement and accommodated the changes within its own structures and requirements, especially in the field of information and technology. The decade of 1990s went in creating a balance between the liberal vision of higher education and generating human resources for an emerging economy and the college performed this with aplomb. The first decade of the 21st century witnessed the college contending with the aggravated challenges in higher education. The introduction of the Central Educational Institution Act, 2007 by the Government of India signified a new process of inclusion of the marginalized and underprivileged sections among the student community who joined Kirori Mal College in large numbers. The period was also marked by the college adopting the structural changes and reforms within the academic curriculum ostensibly to adapt with the technological changes and the demands of a knowledge economy while retaining the essence of a progressive and inclusive education. The unprecedented grants received by the college to absorb the 54% increase in the student intake were utilized to procure new teaching posts, new classrooms and laboratories, additional floors both in the main building and the Science block, a new staff room to accommodate increasing number of teachers, increase in Library space etc. Kirori Mal College was one of the few institutions of the University of Delhi selected for sports training during the Commonwealth Games in 2010 which led to new facilities being created in the form of a new building and a gymnasium to facilitate sports and other activities.

Kirori Mal College today stands at the cusp between the past and the future. While it retains inspiring facets of its proud history, with an equally sharp gaze it looks ahead, assimilating the exciting world of new knowledge as it unfolds in front of it, holding the promise an experience seeped with exhilarating learning and holistic growth for all those who enter its portals.